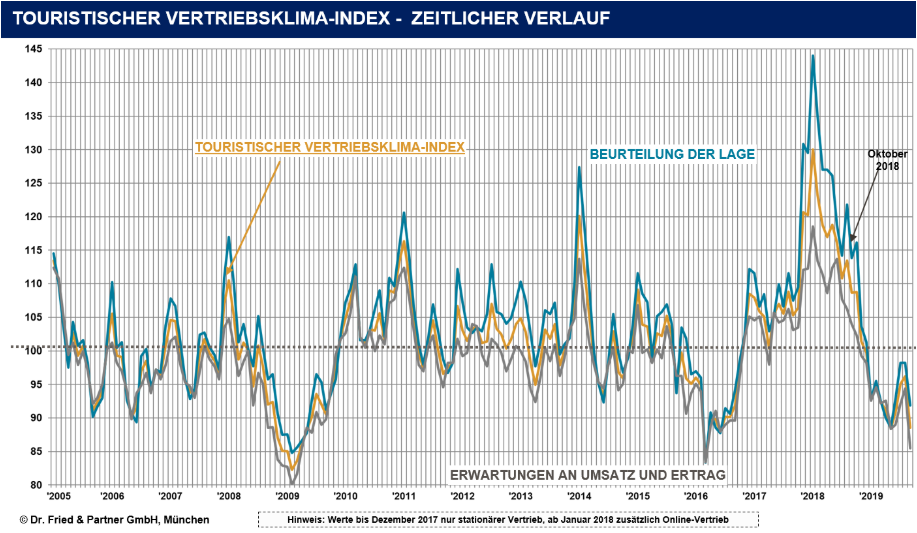 The tourism sales climate index of Dr. Fried & Partner depicts a negative trend in October. On the one hand, the reason for this can be found in the fact that a slight decline in sentiment was regularly recorded in October over the past few years. On the other hand, it can be assumed that Thomas Cook´s insolvency will have a significant influence on the current mood of the participating travel agencies. The offices are therefore rather sceptical, especially with regard to expectations for the coming months.

With regard to future expectations, only 15.8 % of the participating offices expect demand for travel services to increase in the next 6 months compared with the previous year. In September, 21.7% still assumed an increase in demand. 46.7 % of the participants anticipate a constant demand in the next 6 months. A decline in demand is expected by 37.5 %, which represents a significant increase over the previous month (19.1 %).

Summary of the results

While there was still a slight upwind in September, skepticism now dominates. The elimination of a big player has a negative impact on the mood. However, it is also a fact that in October there was often a decline in the sentiment. It remains to be seen how the autumn will develop.

In October 2019, 122 travel agencies (116 sample from the previous month) submitted their ratings.