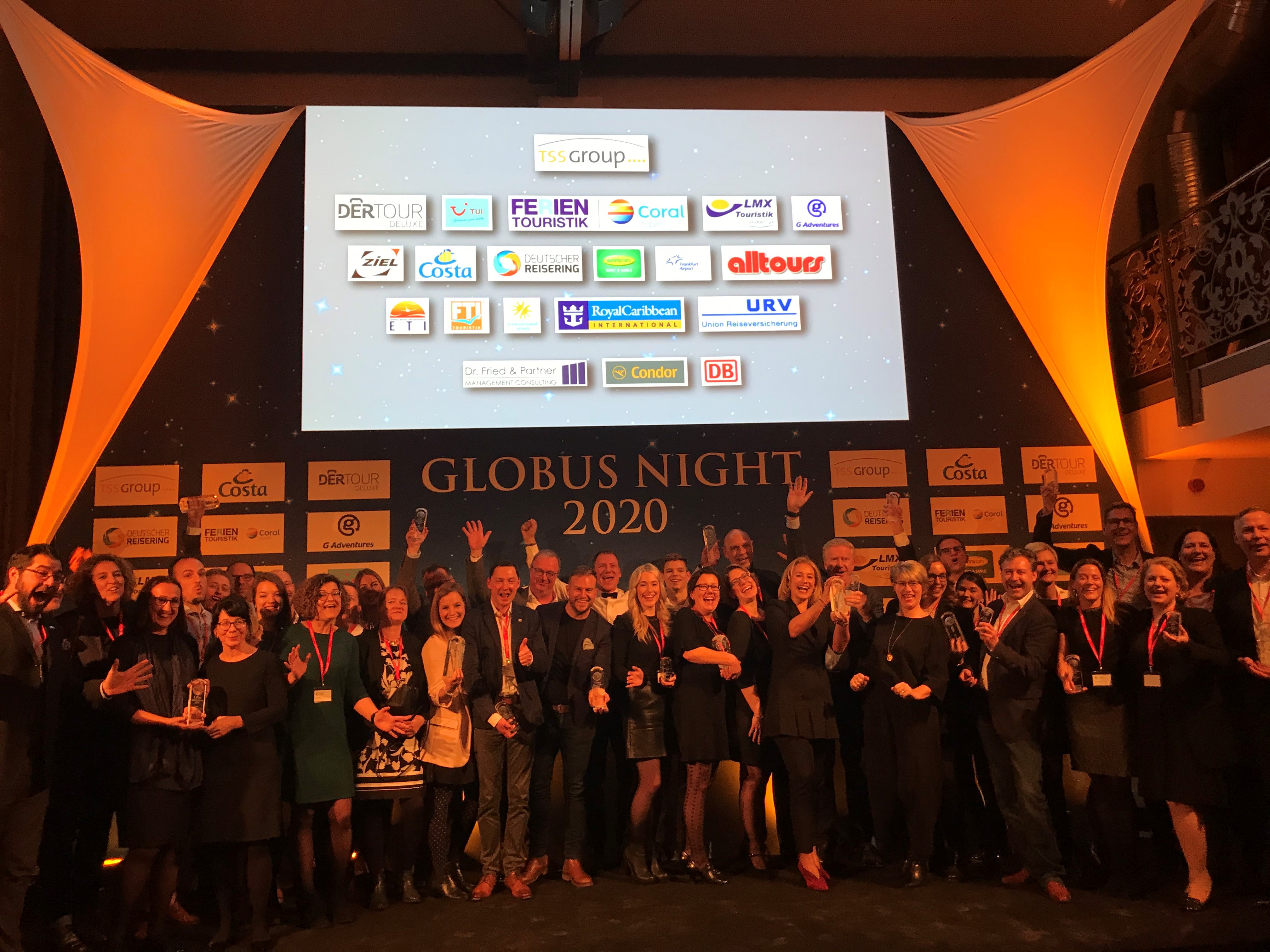 touristik aktuell – the weekly newspaper for tourism professionals – presented the Globus Award to selected travel agencies and tourism service providers for the 11th time. The 2019 award winners were chosen on 30 January 2020 at the Globus Night 2020 at the event location Depot 1899 in Frankfurt.

Appreciation and good service pay off for tour operators

2019 was a turbulent year for tour operators and travel agencies and 2020 is also likely to be marked by changes. The online voting of almost 2,000 travel sellers reflects the fact that in such a time, reliable cooperation is becoming increasingly important for travel agencies.

Schauinsland-Reisen was able to defend its leading position for the fourth year in succession. Once again, the tour operator from Duisburg has been awarded the “CrefoZert” seal of creditworthiness, which certifies both customers and partners the highest level of safety and reliability of the tour operator. The participating travel sellers praised above all the goodwill, availability, competence and friendliness of the service center.

DER Touristik – which is committed to fair conditions and immediate commission payments after booking in the over-the-counter sales department – achieved second place with the tour operators and thus displaced TUI Deutschland to third place.

As one of the first specialist tour operators, Chamäleon revised its commission model at the end of last year: On the one hand, commissions are now paid out immediately after receipt of the down payment, and on the other hand, travel agencies retain the full amount of the commission even if the trip is cancelled. Although this is associated with high expenses for the tour operator, this change obviously pays off. It is therefore not surprising that Chameleon will be able to defend its top position in the “Special Tour Operator” category of the Globus Award in 2019 as well.

As last year, Studiosus/Marco Polo and Dr. Tigges/Gebeco are in the following places.

No surprise with the cruise operators and the Tourist Boards

The top dogs among the cruise providers will not be pushed out of their ranks in 2019 either. TUI Cruises, for example, has already been number one for six years, praised for its route diversity, all-inclusive offers and a user-friendly booking tool, followed by Aida Cruises and Hapag-Lloyd Cruises.

The same applies to the placements of the Tourist Boards. In the 2019 vote, Dubai also defended first place, followed by Australia and South Africa in second and third place. One of this year’s winners in the Tourist Board category is Ireland, which was able to make up four places and secured fourth place. The travel sellers who cast their votes in the online voting praised not only the excellent information material but also the competence and friendliness of the team.

Iberostar had gradually climbed to first place in the hotel category in recent years. The hotel chain is now able to maintain this position for the second year in a row, despite the challenges posed by the Thomas Cook insolvency. The reasons given for this are in particular the various locations and the increasingly high standards in the hotels. This year, Robinson, RIU, Aldiana and the Alltours Hotels follow in the ranking of the most popular hotel chains.

After the entertaining award ceremony – which was moderated by Christian Blaeser and Matthias Gürtler – the winners had to be celebrated properly and the numerous tourists present in the depot in 1899 did so until well after midnight.